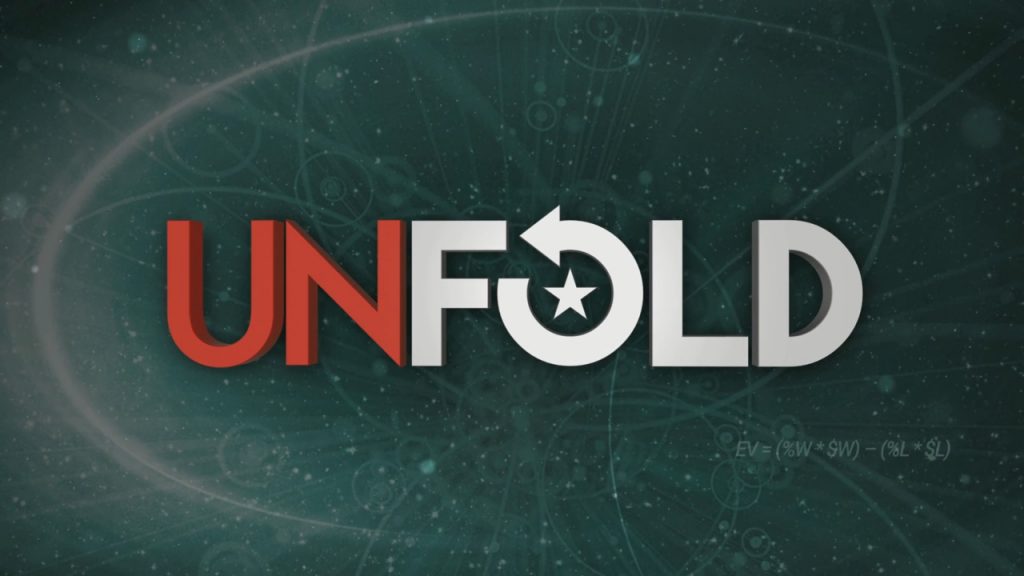 Poker is a card game with many variations. The most popular version around the world, including online, is Texas Hold ‘em. It’s the game that most people will be familiar. Texas Hold ‘em is endlessly strategical, yet developers are always looking for new ways to add exciting dimensions to the game. Traditionalists and some professional players scorn these games while recreational players tend to flock to them. Love them or hate them, new variations offer fresh opportunities for strategy.

Unfold Hold ‘em is the latest variation of poker from PokerStars. It is a cash game format with eight players and starts at stakes as low as $0.03/0.06. Unfold Hold ‘em follows the same rules as Texas Hold ‘em but with one significant difference. Players who have folded pre-flop still have a way to contest a side pot. They can “unfold” post-flop.

All players pay an “unfold ante” pre-flop, which combined makes an “unfold pot.” Players who stay in the hand pre-flop will play out the hand as normal, with no interference from the folded players.

Once the flop has been dealt, those players who folded pre-flop can choose to pay an “unfold bet,” which is the sum of the price of the unfold pot. All players who place the unfold bet will be playing for the side pot (and not the main pot). They can make no further bets, but the folded player with the best five-card hand after the river will win the side pot.

Watch this video to understand how a hand plays out in Unfold Hold ‘em, source: YouTube

It sounds complicated but Unfold Hold ‘em is quick to learn if you already know the rules of Texas Hold ‘em. A few rounds on the tables, and you will understand the basic concept. But what effect does this format have on strategy?

The main impact this new format has on the game is that you can hit the flop after folding. So, you can still play the hand for a side pot. That means less waiting around, and more activity at the tables. In effect, you will have an extra decision to make even when you fold — you will have to decide whether you still want to play.

Such is the main draw for recreational players, many of whom might not have the patience to wait around for hands and will welcome the opportunity to play more. Even for the pros, rubbish hands will occasionally hit the flop hard enough to unfold, leading to more opportunities for profit.

If you don’t fold pre-flop, the hand will play out as normal, and you can use your existing mathematical and strategical understanding of the game to play the best you can. If you fold pre-flop, you will be confronted with the new elements of the game and will have the option to play for the side pot.

The number of people in the unfold pot will also be relevant to your decision. If there are lots of players who could unfold, then you will need a decent hand to continue. If there is only you and one other player who could unfold, then the situation is different, and you can profitably unfold with a broader range of poker hands, from small pairs to flush draws — in this case, you could win by having the best hand or if the opponent chooses not to unfold.

You should observe how loose or tightly opponents tend to unfold. Some may only unfold if they have a big hand while others may unfold at every opportunity. By looking to how many players are potentially contesting the side pot and their tendencies when it comes to unfolding, you can make an informed and profitable decision on whether to pay the bet or not.

Poker is a game of incomplete information, which is why the game is hard, even for AI to master. The other key point to Unfold Hold ‘em is that you can gain additional information by taking note of which hands players are folding. Usually, when a player folds, you will not see what they chose not to play. In Unfold Hold ‘em, you will have more opportunities to see what the other players are not playing. It’s critical information that you can use to your advantage.

For example, a player may unfold K-Js in a situation where you usually would have stayed in the main pot. That tells you that they are tight. Another player may show only the weakest of starting hands when they unfold, which shows you that they are usually in the main pot when they have anything worthwhile. As you know, poker is a game of information, and professionals who are quick to use this will get a head start.