‘Should I call?’ An Introduction into Defending your Big Blind

Unfortunately, poker just like life is not free. Your chip stack has to pay a tax every time it sits on a real or virtual poker table. This tax comes in the form of the small blind and the big blind, which have to be paid every time the dealer button is passed around the table as each hand is played. 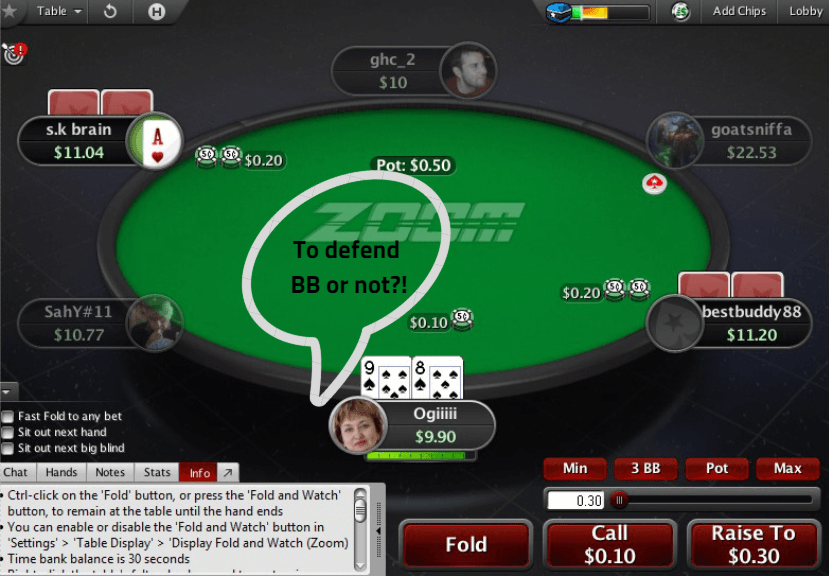 If you are at a 9 handed table, every 9 hands you will have to first pay the big blind and then the small blind plus the ‘antes’ which are small blinds (usually 10 or 12.5% of the big blind) every single hand! This means that you cannot just sit there and wait for pocket Aces! You have to get in there and play a variety of holdings depending on the situations you are faced with.

What ‘defending’ your big blind means…

One of these situations is ‘defending’ your big blind which means calling a raise from another player when you are the player who has posted the big blind. Being in the big blind (posting one big blind) means you will get better odds to call a raise from a preflop raiser. This sounds like a good thing and indeed it can be. But beware! Many players tend to call any old hand simply because they are ‘getting a good price’, this is a not sound strategy in the long run!

The difference between being ‘in and out of position’

When you call a raise from the big blind you always be ‘out of position’ which in general makes your hand harder to play as you don’t have the initiative in the pot as you have to check the action to the ‘in position’ opponent the majority of the time. This means that even if you have a strong hand like KhQc on a KT5hh flop, it’s more difficult to build a pot as you don’t have the betting initiative in the hand. So being out of position makes even the exact same hand on the flop more difficult to play, for this reason, we have to be careful which hands we ‘defend’ versus opening raises from our opponents.

Suitable hands to defend versus an early position raise

In poker (especially in tournaments where there are antes from the start) we are essentially forced into calling a wide
range of hands even versus a strong early position range due to those great ‘pots odds’ we talked about earlier. In fact, we may have to defend up to 50-60% of hands if our opponent ‘min raises’ however we must still be selective with the hands we choose to defend so that we don’t bleed chips in post-flop situations.

This is because hands like k9o and A4o will often be dominated even when they flop top pair versus early and middle position raises, if our opponent bets three times on A583Thhxxx we often don’t know what to with A4o by the river, it’s a pure guessing game. So it’s better to make sure we fold more offsuit trashy hands like this and defend more lower suited hands like 74ss as these hands can make ‘nut’ hands (flushes/straights) much easier at deeper stacks. They also don’t ‘‘interact’ with the opener’s range as much, for example from early position players won’t open hands like 94ss so if we flop trips with 74ss on a K44 flop we don’t have to worry about being beat as much!
Folding in poker is a crucial skill to develop. Most of the new players prefer to play as many hands as possible, but this could turn into a disaster really fast.

Opening up your ‘defending’ range versus later position opens

Things change when defending our big blind versus later position opens from positions like the button and the cut-off. Some players will raise as much as 55% of hands from the button so hands like A4o that were folds versus a tighter opening range are now defends in the big blind. This is because our opponent in late position will now raise hands like K3ss and 22 as well as hands like Q6ss, which instantly makes hands k6o and A3o higher equity defends for us. So the amount of hands you should defend the big blind is defined by the opponents raising range. As always in poker, the situation changes all the time so you really need to assess how much our opponent is raising so we can defend our big blind profitably!

A couple more things to consider…

When defending your big blind always consider the number of players in the hand. If there has been a raise and a call before you, your hand will automatically go down in equity as it has to share the equity with the two other ranges. Often players defend even wider from the big blind if there is more money in the middle as they are getting even better pot odds. This is true however don’t defend any old hand just because you are getting a good price! You need to think about how your hand will play on the flop, turn and river versus the various ranges of hands already in the pot. For example, defending Q9o versus an early position raise and call from the button will often prove costly, as we will often flop hands that are dominated by our opponents stronger preflop ranges!

Think about good/aggressive a player is before defending your big blind versus them. If they often put a lot of pressure on the big blind with flop, turn and river barrels then we should be even more selective when defending and look to cut fringe hands like a4o and J8o as they will simply not be profitable versus in position players with high aggression factors!